Let them eat i Phones

No Food. No Water. No hospital beds. But Gaza has Apple I Phone 5's.

The funniest part is that the phone isn't even available yet in Israel (It won't be released until December), but its already saturating Gaza.

"Apple's new iPhone 5 is selling well in the Gaza Strip despite inflated prices, reaching the Palestinian enclave via smuggling tunnels even before high-tech hub Israel next door.
The cutting edge smart phone is being snapped up for almost double what it costs in the United States, its price jacked up by middlemen on its circuitous delivery route from Dubai via tunnels linking the blockaded territory with Egypt.
But the phones have been available for a couple of weeks in Gaza and they were on display on Monday in three independent mobile stores in a one-block radius in downtown Gaza City."

Its all in the Business Times 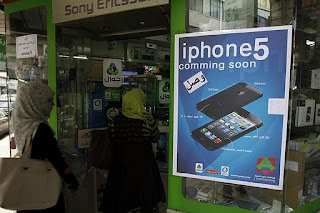 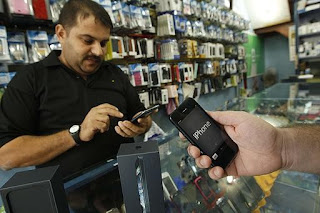 Photos from Palestine Today
Posted by Fatima at 1:42 PM