Purple jihad: Gay Muslims for Peace and the destruction of Israel 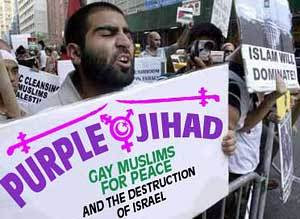 A friend forwarded this, with no further information. Its got to be a joke, right?
Can anyone give me more information about where this was taken, and when (and by who?)

OMG. What is wrong with this picture. Or perhaps the better question is "Is anything right with this picture?". I'm just speechless. And if you know me, you know how hard that is.
Posted by Fatima at 9:49 AM 8 comments: 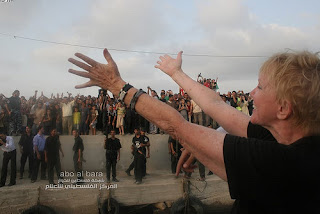 Yeah, its old news, I know that, but a friend of mine just emailed me this photo of Greta Berlin (of the Free Palestine Movement) greeting the people, er, armed freedom fighters of Gaza.

So who are the guys with the big guns? Are they Hamas policemen? Are they government soldiers? Are they just ordinary people with big big guns? IMFO, a guy (or a gal or a kid) with a big gun is a legitimate target. Was it "civilians" like this killed by Israel during Cast Lead?

If you walk around shooting big guns, people, its not non-violent resistance, and all the wishing in the world won't make it true.

Not that you asked me. 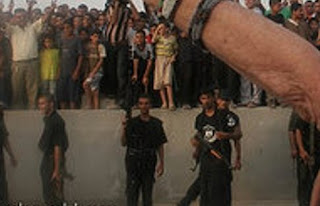 Here's those freedom fighters again. What do you think?
Posted by Fatima at 3:19 PM 2 comments:

A death in Gaza: the Murder of Jabriyeh Abu Kanas

Jabriyeh Abu Kanas, an elderly women in Gaza has been executed for ...wait for it....witchcraft. Come on, Gaza- that's so...300 years ago!

The woman, Jabriyeh Abu Kanas, had been accused by neighbors of practicing witchcraft. The accusations were reported to Hamas . Before Kanas could face her accusers, a vigilante gunned Kanas down in her own garden, right in front of her husband.

The Palestinian Center for Human Rights condemned the murder in an interview with Palestinian Authority media. A police investigation was under way.

Hamas has imposed several restrictions on Gaza residents aimed at increasing observance of its strict interpretation of Sharia law.
Posted by Fatima at 6:17 AM No comments: