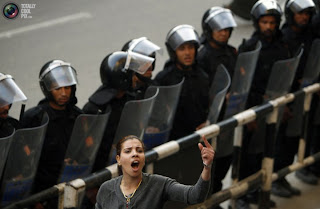 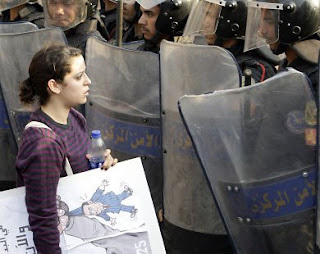 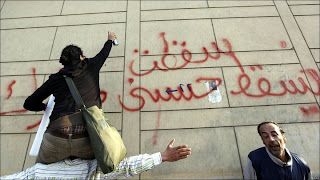 Security forces in plainclothes are engaged in destroying public property in order to give the impression that many protesters represent a public menace. The MB is meanwhile forming people’s committees to protect public property and also to coordinate demonstrators’ activities, including supplying them with food, beverages and first aid.
Posted by Fatima at 3:08 PM 1 comment:

Long Dramatic Sigh. Its time for an Existential Crisis

A friend just showed me how to use the Stats Tab at Blogger. (Yeah, I've been doing this for a year and I still can't find my way around my own site.)

On November 2nd, the Middle East Children's Alliance, Jewish Voice for Peace , Code Pink , the Arab Resource Organizing Center and others hosted two Palestinian speakers at the First Congregational Church of Berkeley. Areej Ja'fari, a youth/women’s leader and activist from Dheisheh Refugee Camp and Hanin Zoabi,a Palestinian Member of the Knesset, and a participant on the Gaza Flotilla were the speakers.

One of the most interesting statements from Zoabi: “According to the National Democratic Assembly, my party, we are talking about two states - one Palestinian State in the West Bank with East Jerusalem as its capital and a state for all of its citizens in the borders of 1948.”

Yep. No Jewish state in her vision.

I've got copious notes on the talk. I promise I'll write them up. Really, I will.
Posted by Fatima at 8:45 PM 1 comment:

American Muslims for Palestine,whose motto is "Empowerment through Education and Action", seems to be spreading quite a bit of misinformation lately. In their recent mailing (thanks, Hatem, for adding me to your email list!) a headline reads:

"Israeli Reactor Leads to West Bank deaths", claiming "Dramatic increases in cancer cases, sterility and abnormal births in south of the West Bank is said to be linked to a uranium leak at the Dimona nuclear power plant."

Checking the medical literature published in the last few years shows nothing that supports this statement. There are no statistics. There are no references provided. Nor is there any mention how death and disease appear to skip the Israeli population located in the immediate vicinity of the reactor, and only hurt people on the West bank. (Wait- I saw that movie with Charlton Heston: Its because the Jews mark their doorposts with blood, and the angel of death, and its proxy uranium leak skip those houses. Right?"

But here is where they completely lose me:

The article continues: "Governor of al-Khalil, Kamel Hemed said, “Last year we killed over 2,000 dogs in our region. They were not behaving normally and were very aggressive and huge in size.”

Yes, you read it here first. Or second, if Hatem Bazien signed you up for his alerts, also. Huge, monstrous mutant Zionist hound dogs. The X-men of the dog world.

We already know the Zionists control the air. And the sea. Looks like they've got the land covered too, with this new breed of huge aggressive mutant dog.
Posted by Fatima at 5:42 AM 1 comment:

Co-existence : Pass it on Israeli/Palestinian Cooperate in Planning for the 2012 Olympics

Israeli and Palestinian Olympic officials met Thursday to begin building closer ties , in an effort to send stronger teams to the 2012 London Games. At a recent International Olympic Committee meeting, Palestinian athletes were promised IOC funding and Israeli support to prepare for the London Olympics. Israel committed to hosting the Palestinian team at training camps and coaching seminars, and sharing its knowledge of sports science and medicine.
The parties hailed the "positive and constructive" meeting, and agreed to study the travel issues before returning to Lausanne in March. That's when they plan to present proposals to their governments.
"We believe that through sport we can make a difference. I hope today we made the first steps," Efraim Zinger, secretary general of the Israel Olympic committee, told The Associated Press.
Zinger described Palestinian Olympic leader Jibril Rajoub as a partner in the process.
Rajoub said it was "a common choice for everybody" at the meeting to seek ways to help Palestinian athletes and teams compete internationally.
"It is my dream as Palestinian national Olympic committee president to participate in next year's Olympic games by an army of athletes," Rajoub told The AP.
Zinger said Israel was committed to hosting the Palestinian team at training camps and coaching seminars, and share its knowledge of sports science and medicine.
"We are there and in advance we said 'Yes' for any request regarding assistance for the preparation of Palestinian athletes for the Olympic Games," Zinger said.
The IOC delegation was led by Pere Miro, director of relations with national Olympic committees, who said the two parties showed "impressive" support for Olympic ideals.
"Through sport we can contribute to make a more tolerant world and make societies understand each other," Miro said.


Read more here
Posted by Fatima at 11:20 AM No comments:

Macy Gray is scheduled to appear in Tel Aviv on February 11th and 12th
It will be her fourth time in Israel.
Gray announced that she would honor her commitment to perform in Tel Aviv after taking a poll on her Facebook site. As of my last visit, there were over 7,000 responses on both sides of the issue. . Defending her decision, she had harsh criticism for the tone of some of the critics used to challenge the decision.
Posted by Fatima at 9:26 AM 1 comment:

Macy Gray under attack for playing in israel

Macy Gray published this on her official Facebook page:

“I’m booked for 2 shows in Tel Aviv. I’m getting alot of letters from activists urging/begging me to boycott by NOT performing in protest of Apartheid against the Palestinians. What the Israeli government is doing to the Palestinians is disgusting, but I wana go. I gotta lotta fans there I dont want to cancel on and I …dont know how my NOT going changes anything. What do you think? Stay or go?”

Poor Macy has since fielded over 2,000 comments. Will she read them? I doubt it, but I can't help but think about the consequences other performers have faced by making the decision to honor their music and their fans by keeping their commitment to play in Israel. Pete Seegers facebook page has been hijacked for nearly three months. Jethro Tull faced the same treatment.

Why do people think that preventing musicians from playing in Israel will advance the cause of the Palestinians? 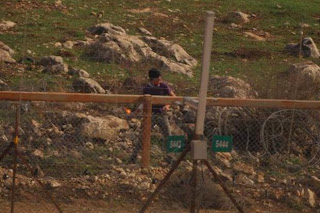 Once again, the lie makes it half way around the world before the truth even puts on its pants. Don't wait for retractions from the mainstream media.
Posted by Fatima at 1:43 PM 3 comments: