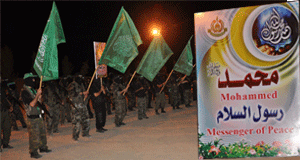 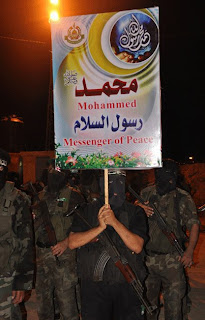 Celebrating Mohammed, Messenger of Peace with armed masked men and big scary guns. Don't know if I should laugh or cry.

More photos of Israel's partner for peace can be found here
Posted by Fatima at 5:36 PM No comments:

An officer and a Muslim Zionist

What a fearless man. This article is circulating quite a bit, but its important.
From Israel Hayom, which I assume is a mouthpiece of the World Wide Zionist conspiracy.

"From the age of zero I was told that Israel stole Palestine from us, but when I was 14 I woke up. I discovered that Jews are not bad," says Ala Wahib, an operations officer at a key IDF training base, and the highest-ranked Muslim officers in the Israeli army.

Major Wahib, 32, is currently the highest ranking Muslim officer in the IDF. He is enormously patriotic, a true Zionist. Precisely the kind of person we like to see lighting the torches during the national Independence Day ceremony every year.

But still, Wahib came to this interview with immense trepidation. Even today, after 12 years in the Israeli military, he still doesn’t feel comfortable openly discussing his views. For years he struggled on all fronts: he fought against the residents of his village, who to this day refer to him as a traitor, and he fought the military institution that never fully understood his motives.

"In my village, they can’t understand what could possibly motivate me to protect a country that is not my own. In the army there are people who know me and would go all the way with me, but there are those who don’t know me and don’t really know how to relate to me,” he says.

So why did he decide to give this interview, with his face exposed and his full name in print? “Because it is important to me to show the Arab public what they are missing. There are quite a lot of people [in the Arab community] who want to enlist, but they are afraid and they don’t know if they will be accepted by their environment. It is important to me to show them the road I’ve traveled, and to make them understand that it is possible.” Regardless, he doesn’t take his hand off his gun for a second during the entire interview. “It is my security. It is my only means of protecting myself,” he says.

His Hebrew is fluent, without a hint of an accent, and he could easily be mistaken for an average Tel Avivian. A map of the training grounds hangs on his office wall, and his green eyes constantly sweep it, making sure again and again that everything is under control. Every once in a while a soldier will knock on the door, asking permission for this or that mission, and one of them, noticing the newspaper crew, can’t resist and says “write that he is the best commander there is.” Wahib tries to hide an embarrassed smile and tells the soldier to get his backside back to the field.

He describes himself as a “Zionist Israeli Arab.” Four years ago he went on a tour of Nazi extermination camps in Poland, together with his fellow officers, as part of the IDF’s Witnesses in Uniform program. “As a child,” he says, “I grew up in a society that denies the Holocaust. When I arrived in Poland I was shocked. I cried a lot. It was difficult to contain this thing called genocide. There was something very powerful in the fact that I was standing on Polish soil, holding an Israeli flag and donning the uniform of the Israeli army, but this time from a position of power. It was proof that we can’t be broken.”

When Wahib says “we” he means the Jewish people. “I believe in the Muslim faith, and I will never abandon it, but I think that Zionism is more than a religion. It is something that fully represents my sense of belonging to the State of Israel and to Israeli society, and the immense commitment I have to protecting and guarding the country of which I am part.”

Lets hear it for Israel, the Apartheid state.
Posted by Fatima at 10:55 PM No comments: