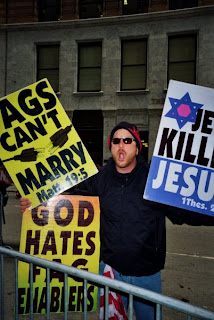 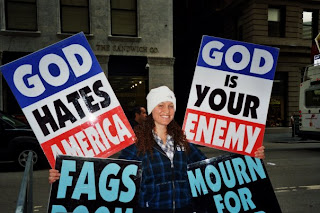 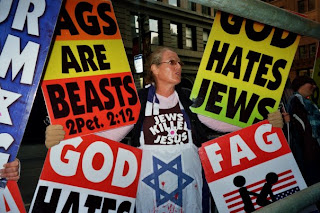 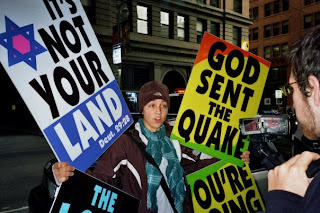 San Francisco hosted Hate group "Westboro Baptist church" on Friday, January 29, 2010, and I am embarrassed to say, they were unchallenged. I suppose some of the community felt ignoring them would make them go away- it didn't work in this case.

Generally this group focuses its hate on queers- interestingly enough, here in San Francisco, birthplace of gay rights, they changed their focus to good old fashioned Jew hatred.
Posted by Fatima at 8:36 AM 3 comments:

The Gazan slave trade- the situation for ALL women in Gaza is so much worse than you can imagine.

Firas Press has an article on how Gazans are taking advantage of poor Egyptian families. Acting as middlemen, Gazans offer to smuggle underage Egyptian girls through tunnels to Gaza to get married to weathy Gazans. Yes, there are many wealthy Gazans. For this service, they charge $1000. Once the girls come over, they are married as second or third wives to Gaza men who treat them as maids for their extended families. Others are forced into prostitution or to work for drug dealers. One smuggler who was interviewed is getting so wealthy from the slave trade that he has bought a house in Rafah to facilitate the smuggling of more Egyptian girls. The article claims that hundreds of girls have been taken advantage of this way, and they cannot afford to pay to escape back to Egypt.
Posted by Fatima at 2:40 PM No comments:

77% of women in the Gaza Strip are subject to violence

You cannot blame Israel for this- this is an issue with the oppressive, patriachial Hamas regime, and yes, with a corruption by the ruling elite of the original message of Islam.
Posted by Fatima at 2:28 PM 1 comment: 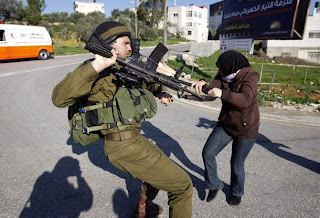 You know girls, if you grab a soldiers machine gun, you are going to get arrested.

Life is about smarter choices, sisters. This a Reuters photo, captioned "A Palestinian woman tries to grab the weapon of an Israeli soldier in the West Bank village of Nabi Salih, near Ramallah, January 22, 2010. The scuffles erupted between Israeli forces and about 20 Palestinians near a violent protest staged by Palestinian, Israeli and international activists over a land dispute with Jewish settlers in the area, witnesses said on Friday."

I believe in non-violent resistence, but that means no touchy touchy, no grabby grabby and no rock throwing. Real non-violence.
Posted by Fatima at 7:55 PM 4 comments:

In Khartoum Alone, 43,000 Women were Arrested because of their Clothing

On July 3, 2009, Sudanese journalist and activist Lubna Al-Hussein was arrested, along with 12 other women, for wearing trousers, under a law that metes out a punishment of 40 lashes for wearing "indecent clothing." Refusing to plead guilty, Al-Hussein resigned from her position in the UN and waived her diplomatic immunity, demanding to be placed on trial, in what rapidly became a cause célèbre for women's rights in Sudan.

Why ALAH? Because we're manly women and we're proud!

Why have we started ALAH (Arab Lesbians against Hate)?

Because we're "manly women". Because we're deviants. Because we threaten "normal" girls.
No, we don't believe that, either, but the United Arab Emirates does, and they've started a campaign against us.

Last year, Naji Hay of the UAE ministry of social affairs said on Al-Arabiya TV: "The phenomenon of manly women has become apparent in society ... These women are against the normal nature of females. Their deviant behavior threatens other normal girls. This is why we had to launch this initiative to protect society from this menace."

The campaign is called “Excuse me, I am a girl," directed against the "fourth gender," a euphemism for gays.

Excuse me while I vomit.
Posted by Fatima at 8:55 PM 3 comments:

"Save me. I don't want him", an 11 year old girl cries. But in Saudi Arabia young girls are property and they can be disposed of at father's whim.

News of a Saudi octogenarian marrying an eleven-year-old girl has outraged human rights activists amid calls on the government to regulate the marriage of underage girls, local media reported Saturday.

The Saudi National Human Rights Commission formed a committee to investigate the marriage, which activists consider a flagrant violation of human and children rights, the Saudi newspaper al-Riyadh said.The father, who took 85,000 riyals (more than $22,000) in dowry, defended his decision to marry off his 11-year-old daughter even though his wife vehemently objected."I don't care about her age," he told the paper. "Her health and her body build make her fit for marriage. I also don't care what her mother thinks."

The father added that marriage at such an early age has been a custom in the Saudi society for a very long time and that he saw no reason why it should be a problem now."This is a very old custom and there is nothing wrong with it whether religiously or socially." On the other hand, the groom said that the father, who is also his cousin, was the one who offered him his daughter and that the mother was totally against the marriage."He told me 'I have a girl and she will marry no one but you,'" the groom told the paper. "So, we got the witnesses and summoned the registrar. I paid the dowry and we held the ceremony and that was it. "

The groom expressed his surprise at how the media leveled harsh criticism against him and his family for marrying the girl."It is very simple. We didn’t do anything wrong. It is a valid contract that meets all the conditions for marriage? What's the point of all this fuss?"

The groom has three other wives, all much younger, and they all have kids. As for the bride, she just called for help as she burst into tears."Save me. I don't want him," she cried.
Posted by Fatima at 8:34 PM 1 comment:

Resistance to Tyranny can begin with one keystroke

We are women.
Mothers, daughters, sisters
And wives.

Marginalized as women. Marginalized as queer.
Living in two different world, but not belonging fully to either.
Forced into veils. Forced into marriage.
Voices that has been marginalized through generations will join together here in strength. Together we will gather courage.

It is our sincere hope that this blog will provide a forum for our sisters throughout the world.

Resistance to Tyranny can begin with one keystroke. Lets start now.
Posted by Fatima at 7:41 PM 2 comments: