On Friday February 11 60 minutes correspondent Lara Logan suffered a ‘Sustained’ sexual assault at the hands of an Egyptian mob.

Lara Logan was covering the scene in Tahrir Square when she became separated from her crew. A mob of more than 200 people surrounded her. She suffered a brutal and sustained sexual assault and beating. eventually, she was saved saved by a group of women and some 20 Egyptian soldiers. The mother of two reconnected with the CBS team, returned to her hotel and returned to the United States on the first flight the next morning. She is currently in the hospital recovering.

Ah, Egypt. Freedom we have, but Freedom to do what?
Posted by Fatima at 4:56 PM 1 comment: 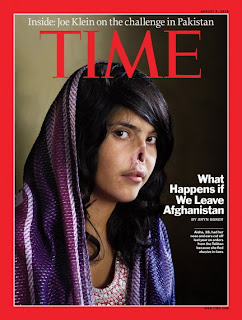 From an article by Joe Pompeo

The iconic, controversial Time cover photo of an 18-year-old Afghan woman missing her nose has been named World Press Photo of the Year.

"It's an incredibly strong image," Ruth Eichhorn, one of the jurors of the annual contest said in the group's announcement of the award in recognition of the magazine's August 1, 2010 cover image. The annual Photo of the Year prize is sponsored by the nonprofit photojournalism organization World Press Photo. The photo "sends out an enormously powerful message to the world, about the 50 percent of the population that are women, so many of whom still live in miserable conditions, suffering violence," Eichhorn said. "It is strong because the woman looks so dignified, iconic."

The image was captured by Jodi Bieber, a photographer from South Africa. The woman it depicts is Bibi Aisha, who was 18 when she left her husband, a Taliban fighter, over claims of domestic abuse. In an act of retribution, the Taliban allowed him to cut off her ears and nose. Aisha's husband abandoned her after the assault; American soldiers and aid workers later rescued her and transported her to the United States--where she now lives--for reconstructive surgery. The Grossman Burn Foundation - the Los Angeles-based organisation is financing the surgery.

Aisha Bibi's story is relatively common in Afghanistan. Her father gave her away at age 12 to pay a blood debt. She was handed over to his family who abused her and forced her to sleep in the stable with the animals.

The UN estimates that almost 90 per cent of Afghanistan's women suffer from some sort of domestic abuse.
Posted by Fatima at 7:38 AM No comments: