Mohammad al-Ghourani, 26 died in a blast in his Jabaliya refugee camp home on Monday, medics said.

Al-Ghourani was handling a homemade explosive device when it detonated.

Three of his relatives were transferred to hospital for shock, medics said.

(Its still Israel's fault)
Posted by Fatima at 10:53 PM No comments:

Gaza: Where Murderers go for Rest and relaxation

Many of the ex-convicts released to Gaza in exchange for Gilad Shalit are staying at the 5 star Al-Mashtal hotel. 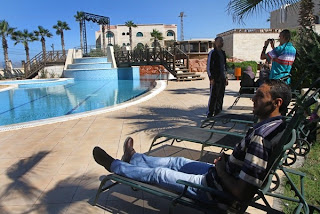 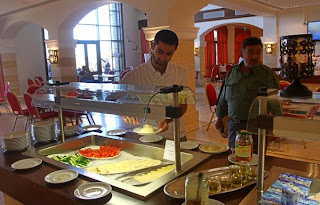 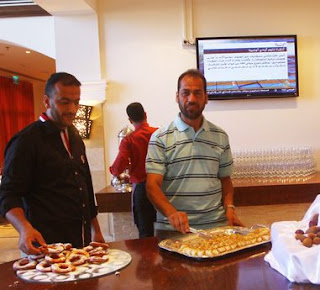 These and more photos are available at the Palestine Times
Posted by Fatima at 7:55 PM No comments:

"It was hard for me to see this abduction destroy the peace process. Such a kidnapping is not courageous and is not based on the culture of Islam."
Mustafa Salim, on his solidarity w with Gilad protest


Mustafa Salim, 35, an Arab Israeli resident of the northern village of Muqaibla did not shave or cut his hair for more than five years until this week.

Salim, who stresses he is not a religious person, refused to cut his fair since Gilad Shalit was abducted into Gaza in 2006. On Tuesday, upon the completion of the prisoner swap deal and with Shalit's return home, he was finally able to shave and get a haircut.

Salim claims that his gesture drew much criticism. Many thought he had become more religious. "During this time I was in the territories quite often," he said. "And when they asked me I told the truth. Some said 'let Gilad Shalit die' and some supported me. I am very proud of what I did and of the State of Israel."

From an article by Wendy Rose Gould;

1,400: The number of years that female genital mutilation has been performed, though some references estimate that girls have endured FGM for up to 2000 years. The practice begun during what Muslims refer to as the "era of ignorance."

3: The different types of female genital mutilation. The three include circumcision, or amputation of the clitoris; excision, removal of the labia minora and clitoris; and infibulation, the removal of labia majora, clitoris and labia minora. Girls who receive the latter often have their wounds stitched together will only a tiny opening for urination. In addition to these types, the vagina may also undergo pricking, piercing, incisions, scraping, burning or be introduced to corrosive substances and herbs to tighten the opening.

135 million: The number of girls and women worldwide who've experienced gential cutting. Consequences of FGM range from urinary infections to HIV to sterility to death.

92 million: The number of African girls who are 10 years old and above that have had their genitals removed.

3 million: The number of girls who are at risk of undergoing FGM annually.

7 and 10: The most common period of time in a woman's life to undergo FGM, according to the United Nations Population Fund.


10 - 14: The number of days that girls legs are bound after undergoing female genital mutilation. The legs are bound to make the girls immobile, which allows scar tissue to form.

25: The number of countries that have banned FGM and prosecute those who continue the practice.

171: The number of countries in the world that do not ban female genital mutilation.

Ms. Gould's work has appeared both online and in print for Hearst, Conde Nast, AOL, USA Today and other publications. She is an avid traveler who has lived abroad and traveled the world extensively. She holds a B.A. in Journalism and another in Philosophy.
Posted by Fatima at 9:54 AM No comments:

“Islam bans the purposeful act of someone transforming his or her sex,” says Sheikh Khaldoun Araymet, secretary general of the Higher Islamic Council in Lebanon, Dar al-Fatwa. “A human who suffers from this perplexing condition … is unbalanced in terms of his behavior, his religion and his psychological condition.”

FROM Being Transgender in Lebanon

AAccording to Simon (who requested that only his first name be used to protect his anonymity), a social worker at the gay rights organization Helem:

“The main challenges they face are social rejection … and discrimination when it comes to work,” says Simon. “They earn less than their colleagues, and that’s if they find a job … They get harassed in the street and often beaten.”

Simon says that as a result of the lack of employment opportunities, many transgender people turn to prostitution.

“Every transgender person I know has tried to commit suicide more than once,” he says.

Dr. Michael Khoury, a clinical psychologist based in Beirut who treats many transgender people, says that when they reach out to a health care professional, most are shunned.

“Lots of people try consulting doctors,” he says. “Most doctors in Lebanon faced with a transgender patient are inaccurate and condescending, if not downright abusive.”

As for receiving treatment for their condition, sex-change surgery is illegal in Lebanon, and Simon says that hormones are difficult to obtain legally.

“Hormones are expensive, so many transgender people start hormones without consulting a doctor,” he says. “They get them on the black market, which is extremely dangerous because they don’t know the effects of these hormones or what kind of risks they might face.”

According to Khoury, many transgender people also turn to black-market surgery. “One of my patients is a female-to-male transgender,” he says. “He had his breasts removed on the black market, and one day he showed me his scars. They were terrible.”

Khoury says that transgender people in Lebanon face the additional challenge of living in a country with strong religious roots.

“There is a strong sense of sin and not belonging to their religion,” he says. “It’s excommunication at the deepest level.” 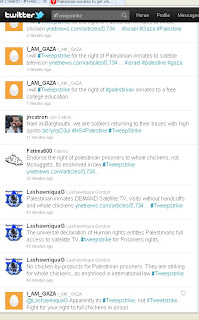 Now this is funny.

The International Solidarity Movement sent out an email, asking people to tweet about Palestinian prisoners hunger strike. They just couldn't bear that Gilad Shalit was getting all the attention.

Several zionist sites recommended active participation in an equal and opposite direction. Apparently several people decided to play along, and as of this afternoon, they succeeded in cuture-jamming the tweet.

Yes, among other demands, the Palestinian prisoners want satellite TV, a free college education, and whole chickens. No, Im not making this up.
Posted by Fatima at 5:29 PM 2 comments:

Did Sarra Besbes, a high ranking Tunisian fencer deliberately throw a fencing match? At the World Fencing Championship in Catania, Besbes was scheduled to compete against Israeli Noam Mills.

Italian media reported that Besbes remained immobile during the match. She cried after her loss, which effects her world ranking. I can't help but wonder what happened before this match. Was Besbes threatened? Was her family threatened? What would cause someone to behave this way?

By losing, though this defeat forces her to face Li Na, a higher ranked competitor.

"I hope this is an isolated incident that isn’t repeated,” said Italian fencing federation president Giorgio Scarso, according to the ANSA news agency. “The fact that the Tunisians did it this time took us all by surprise, because until now that had never happened.”

The only answer is to bar players who discriminate in this manner. Choices should have consequences
Posted by Fatima at 8:00 AM 3 comments:

From antisemite to Zionist by Kasim Hafeez

From antisemite to Zionist by Kasim Hafeez.
Wow.
From an article in the JC

He writes
"Growing up in a Muslim community in the UK I was exposed to materials condemning Israel, painting Jews as usurpers and murderers. My views were reinforced when I attended Nakba Day rallies where speakers predicted Israel's demise.

My hate for Israel and for the Jews was fuelled by images of death and destruction, set to the backdrop of Arabic melodies about Jihad and speeches of Hizbollah leader Hasan Nasrallah or Osama Bin Laden.

There was also constant, casual antisemitism around me. My father would boast of how Adolf Hitler was a hero, his only failing being that he didn't kill enough Jews. Even the most moderate clerics I came across refused to condemn terrorism against Israel as unjustified."

" In Waterstones one day I found myself in the Israel and Palestine section. To this day I don't know why I actually pulled it off the shelf, but I picked up a copy of Alan Dershowitz's The Case for Israel.

In my world view the Jews and the Americans controlled the media, so after a brief look at the back, I scoffed thinking "vile Zionist propaganda".

But I decided to buy it, eagerly awaiting the chance to deconstruct it so I could show why Israel had no case and claim my findings as a personal victory for the Palestinian cause.

As I read Dershowitz's systematic deconstruction of the lies I had been told, I felt a real crisis of conscience. I couldn't disprove his arguments or find facts to respond to them with. I didn't know what to believe. I'd blindly followed for so long, yet here I was questioning whether I had been wrong?

I decided to visit Israel to find the truth. I was confronted by synagogues, mosques and churches, by Jews and Arabs living together, by minorities playing huge parts in all areas of Israeli life, from the military to the judiciary. It was shocking and eye-opening. This wasn't the evil Zionist Israel that I had been told about.

After much soul searching, I knew what I had once believed was wrong. I had to stand with Israel, with this tiny nation, free, democratic, making huge strides in medicine, research and development, yet the victim of the same lies and hatred that nearly consumed me.

As an outsider, I ask why so many in the Jewish community are closing their eyes to the constant stream of anti-Israel hated spewed out from all facets of British society.

And while pro-Palestinian organisations burn Israeli flags, urge boycotts of Israel and protest against appearances by Israeli politicians or artists, UJS's response is shameful. It is not the time for UJS or any other group to engage in hollow flag-waving to show their "progressiveness". Let Israel's democratic history speak for itself. "

"I'm a Palestinian Protesting in Support of Israel"


There's hope for us all. Really. There is. Sons and Daughters of Abraham.
Posted by Fatima at 9:15 PM 1 comment: