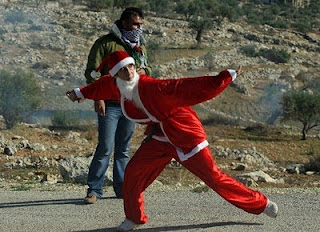 Nothing like a traditional heartwarming Christmas scene. In the riot du jour at Bi'lin, a Protester dressed as Santa throws rocks at soldiers from the Israeli Defence Forces.

Just another heartwarming scene of co-existence from the Middle east this holiday season
Posted by Fatima at 5:09 AM No comments:

Yes, Virginia. There is a moderate Islam:
Orginially found here

This was written by M. Zuhdi Jasser, a doctor and former U.S. Navy lieutenant
commander, and the founder and president of the Phoenix-based
American Islamic Forum for Democracy.


The U.S. Justice Department's decision to file suit against an Illinois
school district indicates it is seriously misguided in its approach
to American-Muslim grievances. The government claims that the
Berkeley district violated the civil rights of Safoorah Khan by not
providing reasonable accommodation for her faith. This unfortunate
position will have a significant impact beyond this case.

In 2008, the math teacher asked for an unpaid three-week leave
in order to perform her Hajj, the pilgrimage to Mecca and a
once-in-a-lifetime requirement in the Muslim faith. The district
denied Khan's request twice because it did not meet the
requirements specified by the union contract. Khan filed an
unsuccessful EEOC complaint and then resigned because she felt the
priority of her pilgrimage outweighed her contractual commitment to
the district.

This Muslim believes that Attorney General Eric Holder's
case is misguided and that Khan's request was not reasonable. Strip
away the political correctness and all the noise of Muslim
victimization, and we are left with a case that most reasonable
Muslim employers and employees would find unreasonable.

I empathize with Khan's deep desire to complete her pilgrimage
and pray for the day that I can do the same. However, the federal
government's intrusion will do far more harm than good by lowering
the threshold of what merits action for civil rights abuse. With
this case, the government runs the risk of becoming the "boy who
cried wolf" and de-legitimizing future requests for reasonable
accommodation from Muslims or people of any faith.

In defending Khan's claim of discrimination, the Justice
Department is empowering an Islamist mindset that demands special
consideration above all others, which is unacceptable in a society
where all are equal before the law.

The conflict between Islamism (societies and states based in
Islamic law) and classical liberalism (our Western societies based
in reason) is among the most important battle of ideas in the 21st
century. The detachment of Muslim youth identification from our
secular society and the fueling of an interpretation of Islam that
is inflexible to an egalitarian society is arguably the most
important root cause toward radicalization.

Khan's request would have stepped outside of her contract and
made Muslims a privileged class. The interpretation this case
demands speaks contrary to the very principles the government is
trying to promote. The Justice Department, and now its choir of
Islamist groups, has deceptively positioned that Muslims such as
Khan "should not have to choose between their religious practice
and their livelihood."

Contrarily, I believe that employers should not have to choose
between the threat of intimidation from Islamists or the federal
government and honoring the onerous demands of any single faith
group or individual as a privileged class.

The practice of Islam is central in my own life, but I have
never demanded that others give it special consideration on my
behalf. To me, my devotional Islam is between me and God and I fear
that any government intrusion ultimately fuels theocrats and their
movements.

Khan was not given what she wanted and made a personal decision
to resign. It is exceedingly difficult to prove that "Islam"
demanded that she perform her Hajj in December 2008. The faith only
asks that once in her life she perform the pilgrimage. By refusing
her leave of absence, the district did not force her to choose
between faith and employment.

We cannot continue to allow political correctness to set us down
a path that promotes isolation versus assimilation and leaves
liberty in a vacuum while Islamism thrives. The framers wanted
justice to be blind to faith to avoid creating special rights for a
select few.