Another Afghan tragedy reported by Yahoo

An Afghan child bride on Saturday spoke of how she was tortured by her mother-in-law who locked her in a toilet for six months, beat her, pulled out her fingernails and burned her with cigarettes.

Sahar Gul, 15, is recovering in hospital in Kabul, her face bruised and swollen, her skin still bearing the marks of her ordeal, barely able to speak.

Police have said she was locked up when she defied her in-laws who tried to force her into prostitution. Her brother had sold her to her husband about seven months ago for $5,000.

"For several months I was locked up in toilet by my in-laws and particularly my mother-in-law," she managed to tell media in a frail voice during a visit from Afghan health minister Dr Suraya Dalil.

"I was denied food and water. I was tortured and beaten."

The minister said it was an example of "increased cases of violence against women in Afghanistan".

Women continue to suffer in Afghanistan despite billions of dollars of international aid which has poured into the country during the decade-long war.

"She is also suffering from trauma and psychological problems," she said.

"She is still a child, below the legal age of marriage. She is only 15 and from a remote part of the country. It's a tragic and heartbreaking story for Afghanistan."
Posted by Fatima at 5:20 PM No comments:

From Ma'an
Hamas cracks down on fortune-tellers, mannequins

The Hamas-run government has launched a series of campaigns targeting fortune-tellers, mannequins and cigarette vendors in the Gaza Strip.

Police sources told Ma'an that 142 fortune tellers were forced to sign an agreement at the Ministry of Interior pledging that they would not practice their craft.

As well as predicting the future, fortune tellers sell amulets for protection and are sometimes called on to solve personal or family problems.

Police are also targeting vendors selling smuggled cigarettes and tobacco, confiscating their goods, police suorces said.
Posted by Fatima at 10:05 AM No comments: 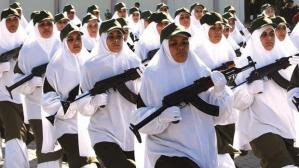 Palestinian women who are members of Hamas security forces march with Kalashnikovs in Gaza during a graduation ceremony for new recruits in Gaza City
Posted by Fatima at 8:44 AM No comments:

I'm not making this up. You do trust me, don't you?

An Islamic cleric living in Europe said that women should not be close to bananas or cucumbers, in order to avoid any “sexual thoughts.” The unnamed cleric, was quoted saying that if women wish to eat these food items, a third party, preferably a male related to them such as their a father or husband, should cut the items into small pieces and serve.

Carrots and zucchini are also forbidden to women.

Answering another question about what to do if women in the family like these foods, the sheikh advised the interviewer to take the food and cut it for them in a hidden place so they cannot see it.

I guess Daikon radish are also out.
Posted by Fatima at 8:31 PM No comments:

From Ray Cook's Blog As I See It – Israel, Zionism and the Media

Thus said Kasim “Kaz” Hafeez in the final session of the Politics thread at the Big Tent For Israel in Manchester on November 27th.

Kaz was part of a panel discussing “How to change the narrative in the Muslim community”.

He told an enraptured audience how he had very nearly ended up in a Jihadi training camp; how he was brought up to hate Israel and Jews.

Kaz, whose website theisraelcampaign.org, attempts to describe the current anti-Israel and antisemitic trends of Islam in the UK and abroad and put the record straight, made a huge impression on several hundred people, mostly Jewish, assembled in the International Suite of the Piccadilly Hotel in central Manchester.

Even though I knew his story, I was moved to simultaneous tears and laughter as Kaz told us how he is a Zionist and has the Israeli flag on his desk at work.

Tears, because the idea of any non-Jew, let alone a Muslim, proudly declaring himself a Zionist and lover of Israel is profoundly moving. We, the Jewish people, are so inured to hate and being despised that when we find we are not alone, that we have friends, that is worth a few tears of pride and relief.

Laughter, because the idea of a proud, practising Muslim displaying the Israeli flag at work is very amusing.

Then Kaz came out with the quote of the year: “Life is a lot happier when you don’t hate as much”.

Everything is contained in that one phrase; life, love, happiness, toleration, respect.

This perfectly describes the solution to what troubles so much of the world today.

Such is the hatred much of the Arab and Muslim world feels, especially for Jews. It is this hatred which drives Islamists to acts of violence, not just against Jews, but against other Muslims, Christians and Hindus.

Are they happy in their hate? I doubt it. How can you be happy to hate?

Hatred is not confined to Muslims. Yet it is Islamist terror and intolerance that characterises the beginning of the 21st century.

Kaz made me cry because he offers hope. He offers hope that Muslims and Jews, Israel and Palestine, can put aside hate and learn tolerance and respect.

It gives me the hope that, in this country, Kaz and those like him, such as Hasan Afzal, can have some influence in their community to stop the hate and lies and half-truths.

How did Kaz learn to be happier? He read, he studied and he had the strength of character and moral courage to go see for himself. he had the honesty to see that everything he had been taught was wrong.

I said to another Muslim at the conference: “We don’t expect Muslims to be Zionists, we just want a fair hearing”. Not the most profound statement I’ve ever made, but it’s true.

It was a great conference and I heard many wonderful things, but Kaz’s simple, heartfelt, unprepared statement will always be the memory and the inspiration I carry from the conference. All the hours, all the hard work, all the arguments and stress were worth it to hear that one axiomatic utterance -

“Life is a lot happier when you don’t hate as much”
Posted by Fatima at 8:13 PM No comments:

The real "Gay Girl of Damascus" is missing.

From her blog:
"I was born in the US but never lived there. My parents went to KSA where we lived for 10 years in Jaddah. Then they went back to Syria and now we’re based in Damascus.

After I graduated from English literature department in Damascus University, I wanted to pursue my studies so I went to Lebanon and spent five years of my life there.

I enjoy photography, drawing cartoons, and writing Arabic articles which I do not do most of the time.

I am vegetarian, genderqueer and kind of pissed of at everything. But a person who cries genuinely while watching Daddy Long Legs cartoon".

Razan Ghazzawi "Redrazan", one of the few Syrian activists who blogs under her real name has been arrested at the Syrian-Jordanian border. She was on her way to attend a workshop for advocates of press freedoms in the Arab world.

Raza was the Media Officer at Syrian Center for Media and Freedom of Expression A statement issued by the Center said Razan Ghazzawi was arrested by police and immigration officials at the border. The Local Coordination Committees activist network confirmed her arrest Sunday.

Ghazzawi is a human rights advocate and had been documenting violations and arrests in Syria since the start of the uprising against President Bashar Assad in March.

Accordering to her friends, her Facebook page has been taken down. Her last tweet was Dec. 2. Razan has been in hiding in Syria for the past few months.

Lets keep the pressure up until Razan is free.
Posted by Fatima at 12:03 PM No comments: