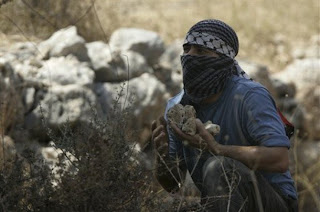 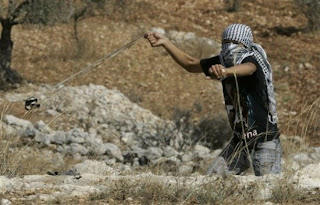 Some photos from the Protest du jour at Bilin. (Oct 1 2010) Why is throwing rocks or using a sling shot considered non-violent? Did Dr. Martin Luther King throw rocks? Did Gandhi?

Personally, I prefer my peaceful protest, well, peaceful.
Posted by Fatima at 3:46 AM 2 comments:

Majed Koka is a gay Palestinian man who came to Israel at age 14, fleeing Nablus

"If I returned to Nablus, it would be like throwing paper into a fire," said Koka, 26, who has been living in Tel Aviv for the last 12 years. "If I returned I'd be in big trouble, one long nightmare."

For the last eight years, Koka has lived with his partner, an Israeli citizen. In 2002, the two registered as married with the municipality. But its never easy. His story:

In June 2009, Koka finally asked the Interior Ministry to grant him legal residency on humanitarian grounds. Fifteen months later, he has yet to receive a response.

Since he is in Israel illegally,he has been arrested nine times over the last 12 years. Visiting his family in the West Bank is also problematic. The last time he did went he was arrested by the Palestinian police on suspicion of collaborating with Israel and subjected to severe torture - which he believes was prompted by his sexual orientation.

"There have been cases of people like me who went back to visit their families and were attacked," he said, adding that in such cases, the assailants usually begin by saying they heard the victim is gay and only then move on to accusing him of collaboration with Israel.

Caught between too many worlds in conflict. The story of Majed Koka.
Posted by Fatima at 1:26 AM No comments: