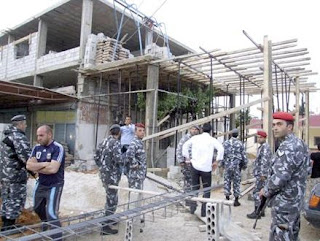 There's a struggle going on in Tyre in the south of Lebanon on the coast, where people are building homes illegally on public land. This isn't a strange thing. As this article explains, poor people who can't afford land often try to build wherever they can. If you read the Lebanese press, you know that this happens all the time.

This current situation in Tyre has gotten super bad. In April, two people were killed when the police fired on a crowd of people who were trying to defend their building.

Now, the builders have been told they have forty-eight hours to tear down the buildings or the police will do it for them.

I don't know if the people building in Tyre right now are Palestinians or not, but a lot of the people are who try to build illegally. Palestinians in Lebanon aren't allowed to buy land, you see, even if they can afford to, or own a house. They can't send their kids to public schools, or go into most professions. They're not second-class citizens, because they aren't citizens. They're just tolerated, until some imaginary day when Israel will have to take them back and Lebanon can wash her hands.

I don't know what to do about any of that; I can't even vote in Lebanon. But it pisses me off that people I know here in Berkeley, who walk around with kufiyat around their necks, talking big about the Palestinians don't know anything about any of this--oh, and when I tell them, they don't care.