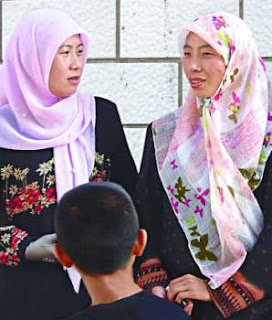 Apparently, in China, woman can be imams.

Don't these woman have beautiful faces, full of knowledge and compassion?

The original article is here:

"When I was a girl most of us females were illiterate. We knew nothing about the world. Taking these classes gives us so much knowledge about how to conduct ourselves as good Muslims and the right values with which to bring up our families," says Ma Fen Zhen, who, at 70, is the oldest student at these classes.

A hundred miles east of Yinchuan in the small town of Ling Wu, 50 other women, their heads covered with scarves, sit in a room reciting verses in Arabic from the Koran. They are being taught by Yang Yu Hong, one of two women imams at the Tai Zi mosque. Yang received her title of Imam from the Islamic Association four years ago. She is one of approximately 200 certified women imams in the province.

Yang's husband, also an imam, is currently studying theology in Egypt. She says that both he and other members of her family supported her decision to study religion and qualify for the title
of imam.

Yang adds that she does not see anything un-Islamic about the concept of women imams. "There are many things that are easier for women to talk about with other women. And everyone, man or woman, has a duty to study and understand the religion."

While the women are granted the title of imam they are still not allowed to lead men in prayers. Their role is more that of a teacher and their students are exclusively female. "The women imams are respected people whom the community looks up to but of course they do not have the same religious powers as men. Men and women are equal but their roles are different," says Ma Xiao.

The people interviewed in the article say that they don't suffer any government control or restriction of their religion. I'm not sure I believe that. It's China after all. But it's so amazing to see how beautiful and diverse Islam is in the world today.
Posted by Salwa at 10:39 PM