A new school was opened in Gaza this week, miraculously created out of duct tape and string , since no building materials are allowed in Gaza. It was dedicated by Prime Minister Dr Ismail Haniyeh, and named after Sheikh Ahmed Yassin.

Photos from the Palestine Times: 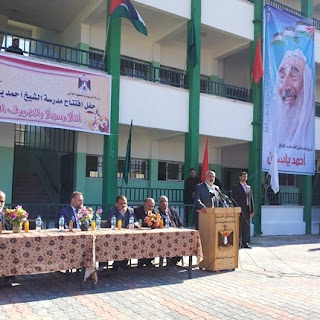 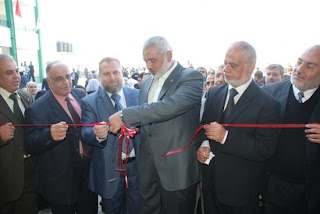 Sheikh Ahmed Yassin In 1989, Yassin ordered Hamas to kidnap Israeli soldiers inside Israel, to murder them and bury their bodies in a manner that would allow Hamas to negotiate the exchange of bodies for Hamas prisoners, who would be released from jails in Israel. Yassin was arrested after the abduction and murders of IDF soldier Ilan Sa'adon, and Avi Sasports. He was tried in Israel and received two life sentences for his involvement the murders

A promotor of terror, of murder and racial hatred. This is who is deemed an appropriate role model for children in Gaza
Posted by Fatima at 3:09 PM