15 % Obesity rate in the Palestinian territories

Some old lady on campus handed me a brochure on the starving children of Gaza last Friday. Why do some people think that making up facts is the road to peace?

I see no scholarly evidence ANYWHERE that children are "starving" in Gaza. Rather, there is much evidence to the contrary. Three minutes at the National Library of Health Website yielded a document that discusses an "alarming" obesity rate for Palestinian school children. And no, its not from some "Zionist" publication- its from the Lancet.

The article goes on to state "The high proportions of overweight and obesity might be attributable to children's poor eating habits (well, duh!) and consumption of unhealthy food and snacks. " Thats NOT Israel's fault.

This article, Associations of Overweight and of Weight dissatisfaction among Palestinian Adolescents: findings from the national study of Palestinian schoolchildren claims " 16.5% of the adolescents were overweight". Its from a Belgian Journal on Human Nutrition, again, not some "Zionist" rag.

Time to get real, people.

UPDATE:
Thanks, Yasmeen, for sending this chart on worldwide obesity from the Economist. Its a bit dated, but still, if under Israel's brutal and genocidal occupation obesity was so widespread, how can you wonder if its not some dastardly zionist plot to, uh, uh....oh, I don't know, but its clearly some dastarly Zionist plot. 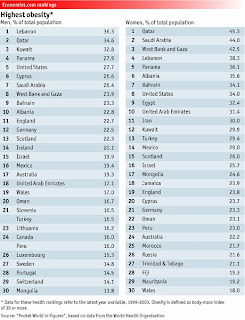 UPDATE AGAIN:
Thanks to an anonymous poster, we have even more up to date info on Gaza obesity rates, with range from 30- 40% and higher

This is from a June 2010 article : "Hyperglycaemia, hypertension and their risk factors among Palestine refugees served by UNRWA"
Posted by Fatima at 1:35 PM