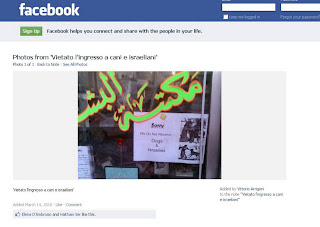 From the Facebook page of Vittorio Arrigoni, killed by extremists in Gaza. "We do not Receive Dogs or Israelies ". Just charming.

No, I'm not going to call him a "peace activist". The International Solidarity Movement volunteers tend to irritate everyone- the drinking, the smoking, the drugs, the occasional dalliances with local girls....(strangely enough, when ISM girls hang out with Palestinian guys, no one says a word. ) I guess infidels are for practice.

Security officials found the body of an Italian man who had been abducted in the Gaza Strip in an abandoned house overnight Thursday, a Hamas security official said.

Two men were arrested and others were being sought.

Arrigoni, an Italian pacifist and blogger, has lived in the Gaza Strip for some time. He was shown blindfolded with blood around his right eye and a hand can be seen pulling his head up by his hair to face the camera.

A spokesman for the Hamas interior ministry in Gaza City said it was investigating the abduction.

The Arabic text that accompanied the footage of Arrigoni also said "the Italian hostage entered our land only to spread corruption" and it described Italy as "the infidel state".

As of today, also from the JPost:

Radical Islamic terrorist organizations in the Gaza Strip distanced themselves from the kidnapping and murder of Italian activist Vittorio Arrigoni, who was found dead early Friday morning in the Strip.

Among the groups who disclaimed the attack was Tawhid wal-Jihad, the al-Qaida-linked group that had initially said it was holding the Italian national and said they would only release him if their own leader, recently arrested by Hamas, was released, Gaza-based newspaper Palestine Today reported.

No, Vittorio wasn't a peace activist, any more than Rachel Corrie was. 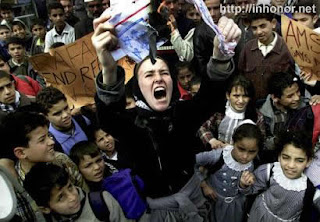 But its irrelevant now, and they are both gone, and they leave behind people who loved them. To their memory I offer this poem, penned by Sheikh Muslihu'd-Din, better known as Saadi, descended from Ali, the son-in-law of the Prophet

All Adam's race are members of one frame;
Since all, at first, from the same essence came.
When by hard fortune one limb is oppressed,
The other members lose their wonted rest:
If thou feel'st not for others' misery,
A son of Adam is no name for thee.
Posted by Fatima at 9:18 AM