Differences in child casualty rates in the Israel/ Palestine Conflict 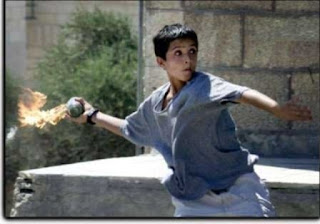 I've been called to task about the differences in the casualty rates in the Palestine/Israeli conflict. Doesn't this prove , I'm asked, that the Israelis are the aggressors?

Ok, lets look at the civilian figures. Germany lost 3 million civilians. Japan lost a half million civilians during the war. The US lost a bit over a thousand. Surely that proves the US was the aggressor? Doesn't it?

There is more to right and wrong than the number of dead.

Other factors explaining the difference in the rate of deaths
1. I can't remember the last time I saw an 11 year old Israeli child throwing a molotov cocktail. Can you? Palestinian boys engage in dangerous militant activities resulting in injuries and death. They are used as soldiers and as human shields.
2. Israel protects its citizens better than the Palestinians do. They built bomb shelters in Sderot, for example, to protect their people.
3. Martyrdom is not promoted by Israel
4. Palestinian children are frequently around munitions, bomb factories, and rocket-firing sites
5. Israel has state of the art medical facilities. Though many Israelis are injured, many lives are also saved
6. Statistics lie. Very often, the statistics are for "Israelis" killed- neglecting to include such foreigners as Americans Marla Bennett, or Daniel Wultz, or Ecuadorian Carlos Chavez killed in acts of terror on Israeli soil. By the same token, a Palestinian killed by the misfiring of a Qassam is still counted as a Palestinian casulty.

The death of any child is a tragedy. But we need to remember hold the Palestinian government complicit in the deaths of boys used as soldiers and as shields.
Posted by Fatima at 9:14 AM